Ever have one of those weeks? Imagine these poor stiffs- can't even go home and take a shower to wash whatever that accumulated stuff is. From Naples.

Big thanks to those who joined us last night at the Grand Annex in San Pedro to celebrate the power of music!! Even if you only danced in your seats!

Posted by Steve Shriver at 3:29 PM No comments:

All we know about Roman era painting (Greek too, for that matter,) comes to us in the form of wall paintings. None of the panel paintings have survived the perils of time, with the exception of the funerary portraits that were locked away in the tombs of Egypt. But in a second hand way, we know that they existed, partly by verbal descriptions from Vitruvius and Pliny, and also by their depictions in several murals, such as this image from the House of the Ara Maxima in Pompeii.

If you look closely at the painting of Narcissus looking at his reflection in the water, you can see that both sides are flanked by folded shutters, which is how these paintings were protected (it also made them easy to display on a flat surface!) They are known as pinakes, and it's where we get the word Pinacoteca, meaning art gallery, which you will see in many places in Italy. Too bad none of the real things has survived!

Posted by Steve Shriver at 12:07 PM No comments:

In some of the later wall paintings of Pompeii and Herculaneum you'll find a whole wall painted just one color, with some kind of small image in the center of it. Could be an Eros, or a dancer, or just some birds, eating fruit. From the House of the Grand Portal in Herculaneum. 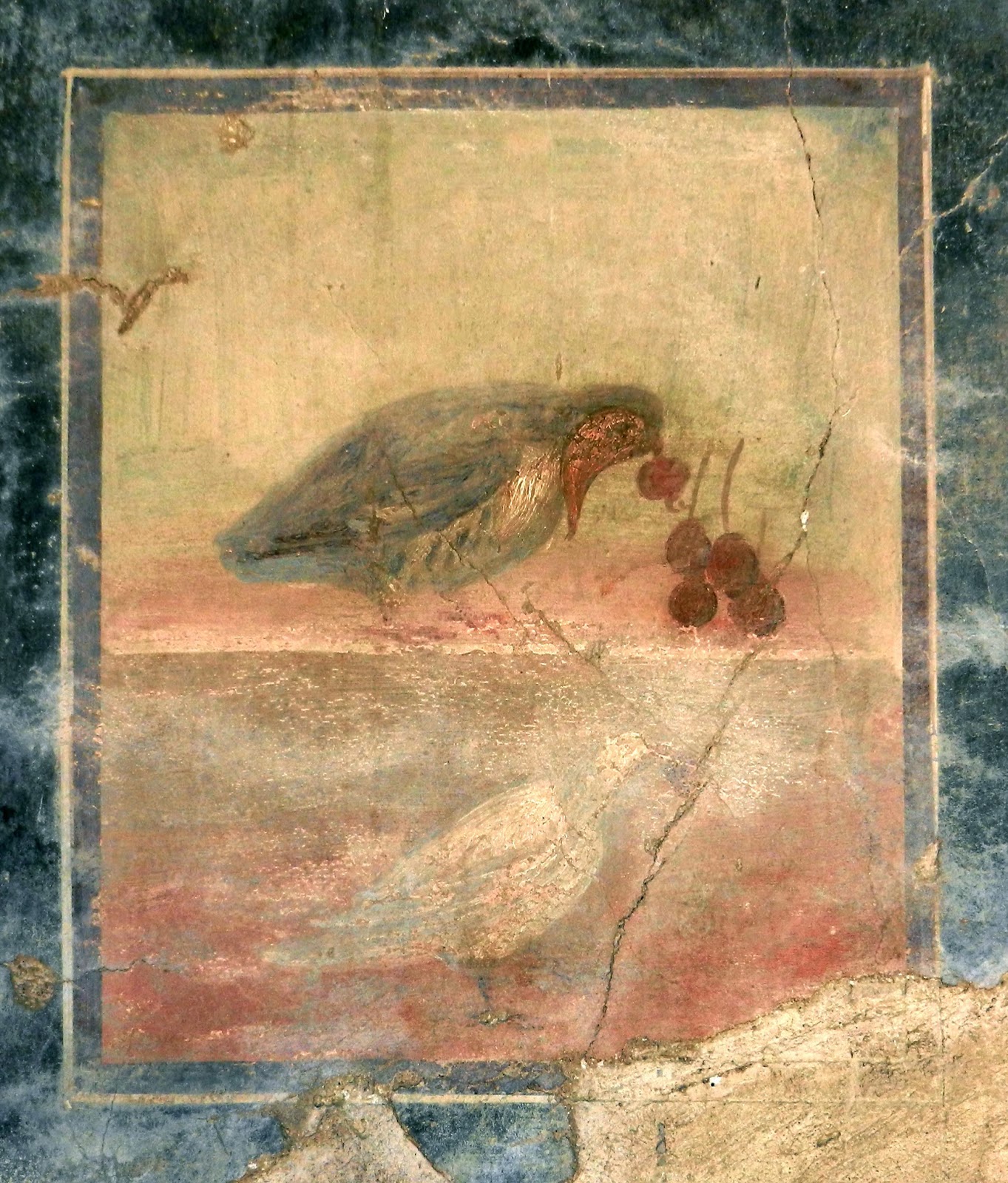 Posted by Steve Shriver at 2:30 PM No comments:

One of the first things that started me down this rabbit hole of ornamental research was wanting to know about Pompeian style ceilings for a project I was working on. At first I had difficulty finding images of ceilings, but I now have about 350 of them, including these. I'm a little surprised at the energy that was often spent on ceiling decorations, which are very hard on the body, making it difficult and time consuming to do. For more photos of what I did at the house go to this earlier post.

Posted by Steve Shriver at 10:33 AM No comments:

One of my very favorite wall paintings anywhere in the Bay of Naples is in the House of the Great Portal in Herculaneum. Not a very large or fancy house in general, but the quality of this work sets it apart. The restrained color is elegant yet dramatic; it's too bad the lower parts of the walls are all gone!

Posted by Steve Shriver at 4:30 PM No comments:

Email ThisBlogThis!Share to TwitterShare to FacebookShare to Pinterest
Labels: fresco, Herculaneum, House of the Great Portal

As some of you may have noticed, my output since going over to posting on the blog page (then sharing on Facebook) has slowed down a bit, though the number of photos has actually gone up. This is because it's easier to post a few on the blog, but then I have to write more about them, which slows me down. Therefore, without further ado, and for your pleasure, I give you 5 photos with little commentary, all taken from the House of the Beautiful Courtyard (Bel Cortile), which certainly lives up to its name. 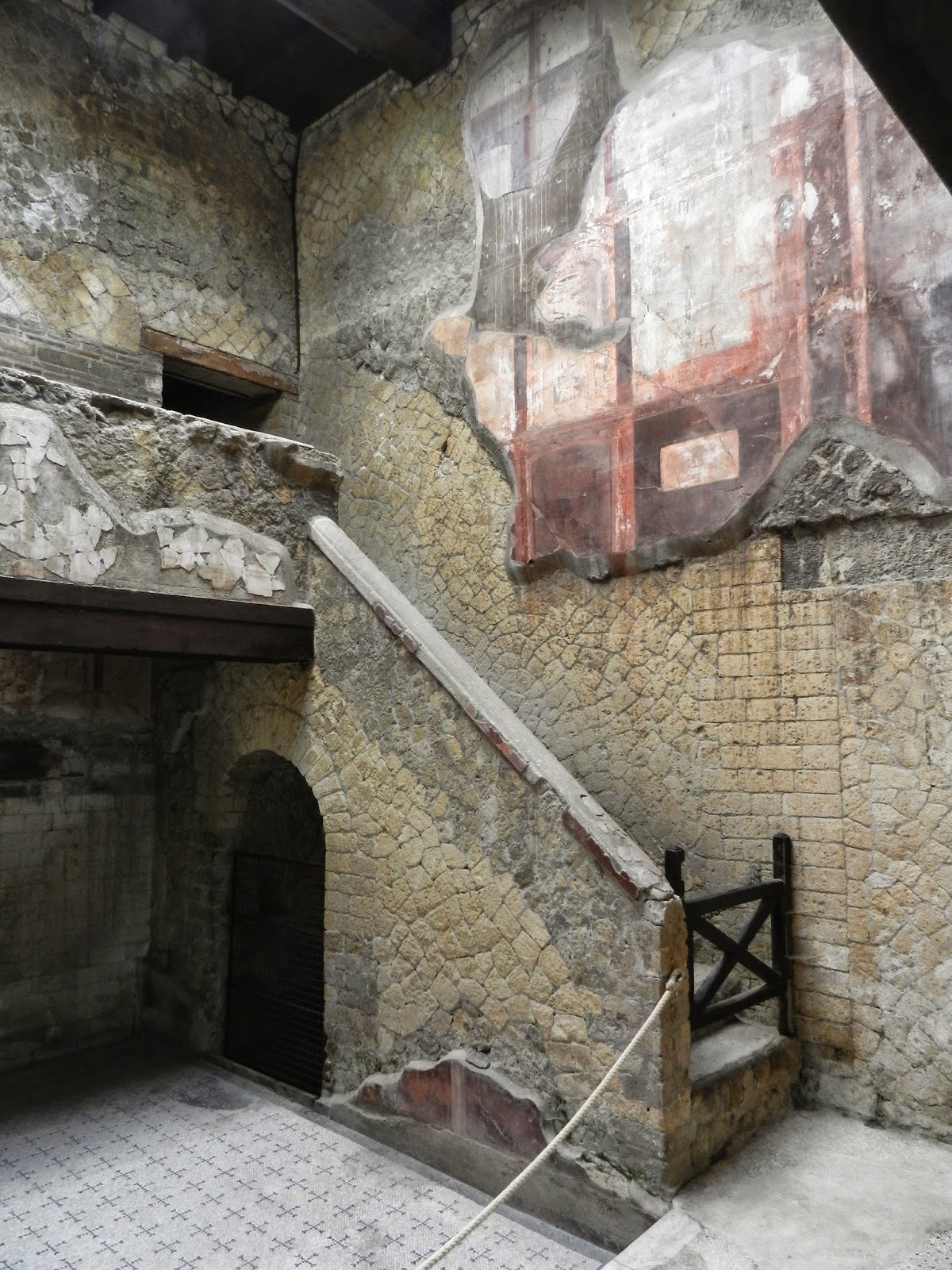 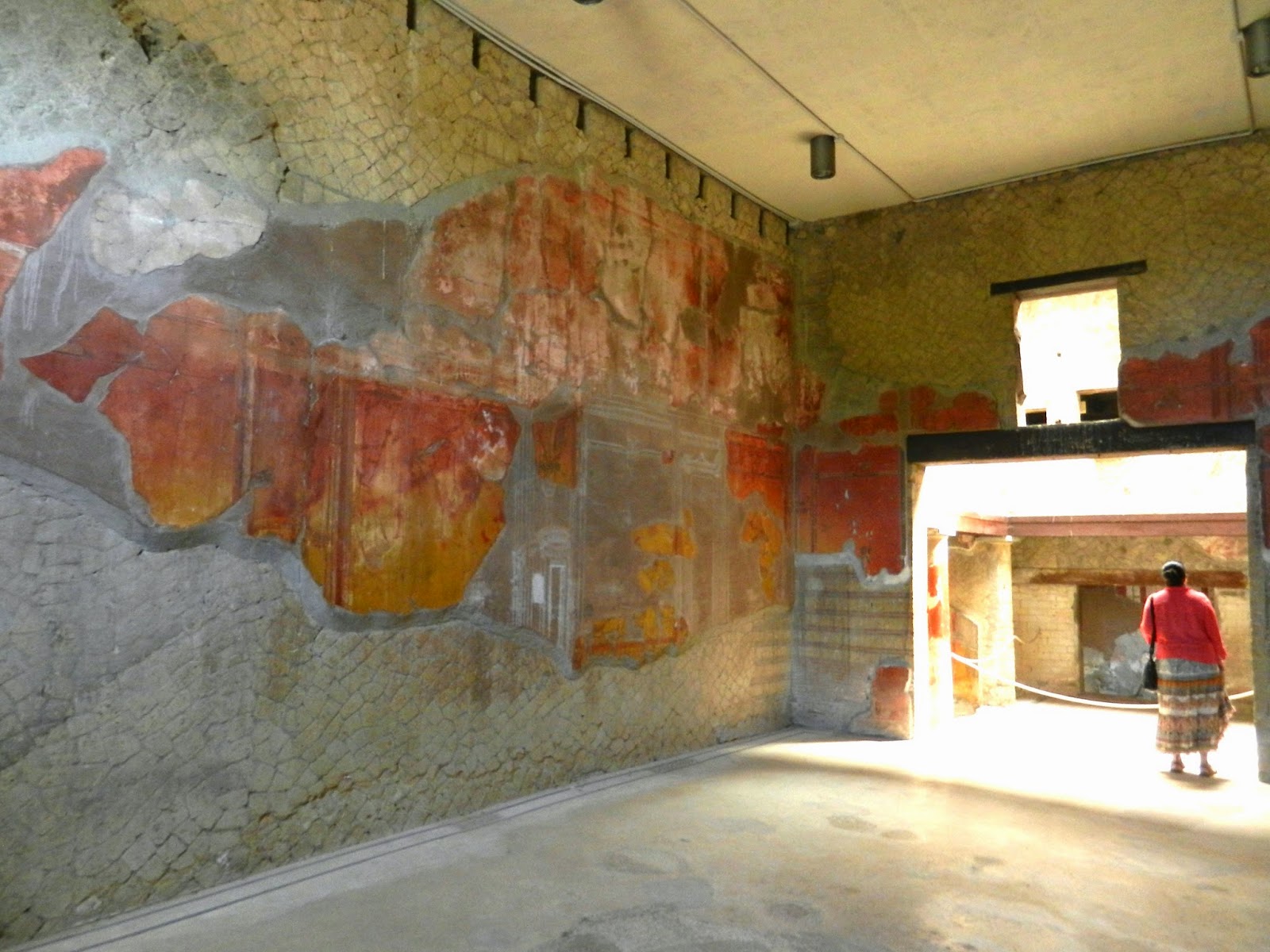 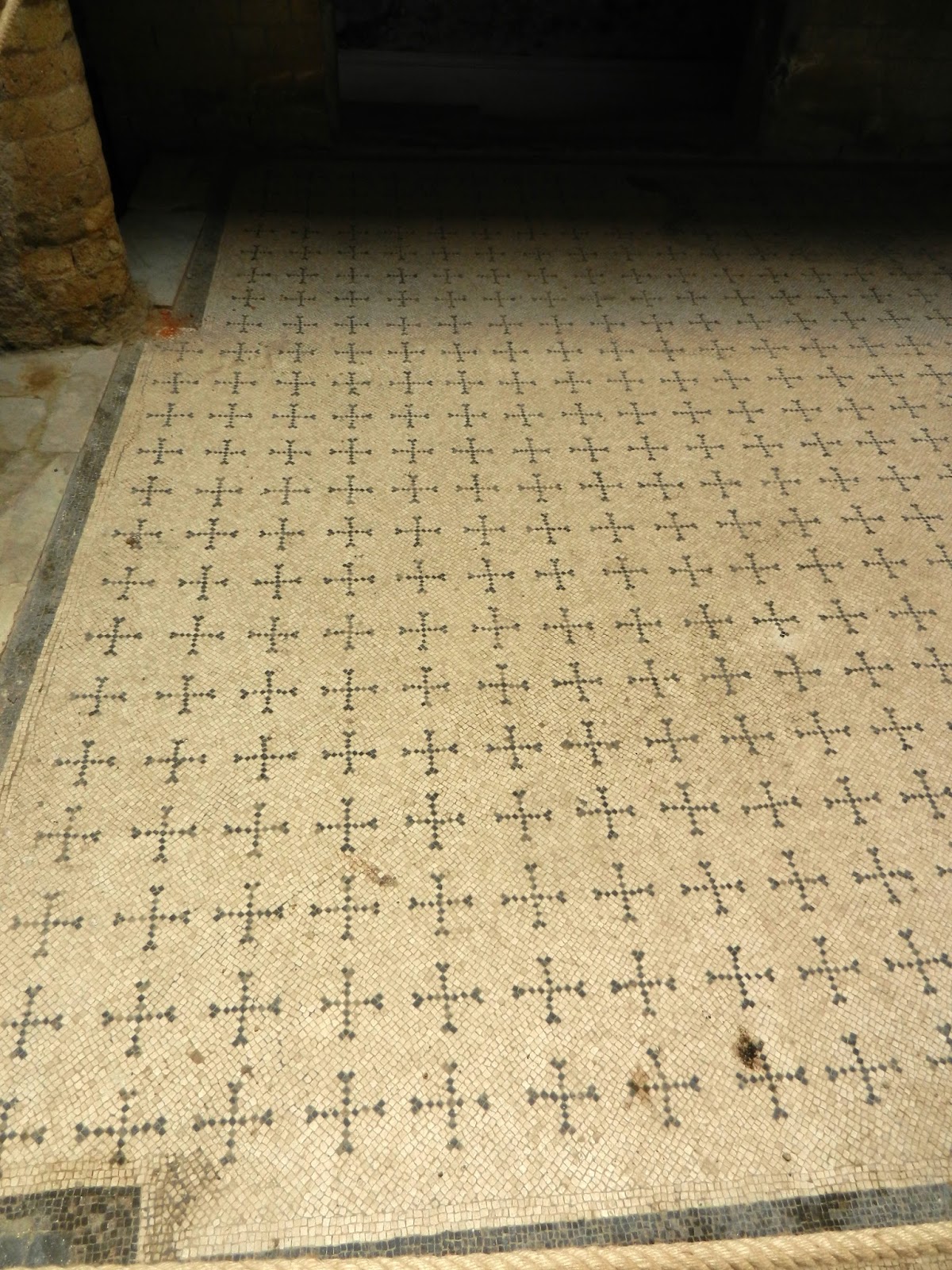 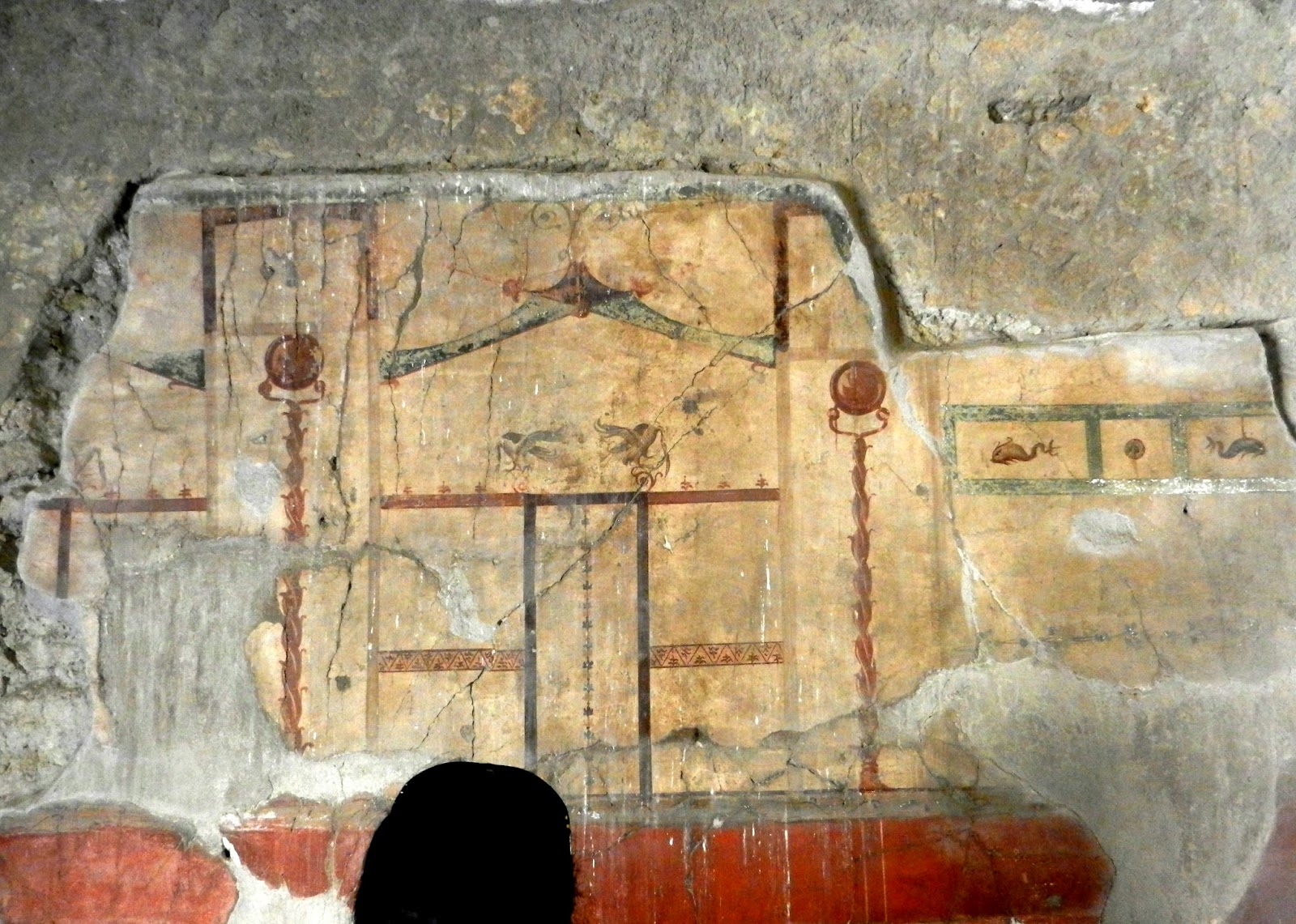 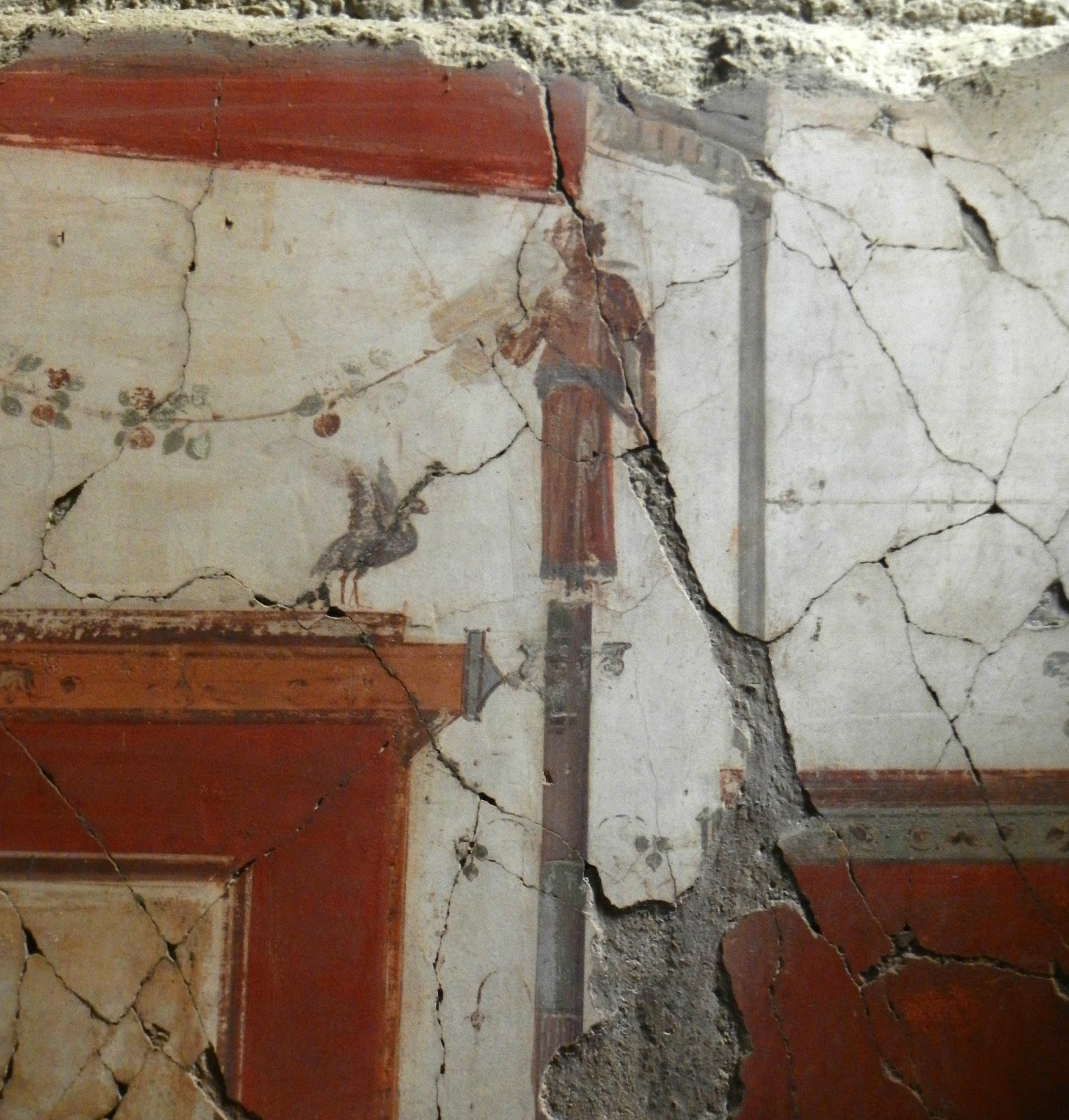 Posted by Steve Shriver at 7:04 PM No comments:

Just kidding! I don't even have a bathtub! Then again, neither did most Roman homes (except the really fancy ones.) Most of them relied on public baths, which were plentiful, cheap, and very well decorated. These shots are from the Women's Bath in Herculaneum, one of several large bathhouses that are preserved there. Unlike Hollywood's lurid depiction of loose morals and prolific sex, Romans were actually fairly modest, and most baths were segregated by sexes.

One feature I have noticed in several of the baths there are the ridged ceilings, which are not only attractive to the eye, but they also serve to keep water from dripping on one's head (by funneling it down to troughs on the wall.) Very nice when your in the caldarium (hot room) where the drips can sting quite a bit, especially on your head!


Posted by Steve Shriver at 2:18 PM No comments:

A visit to Herculaneum seemed to confirm that all was not lost in the modern world. There has been a big effort at Herculaneum to preserve and conserve what is there, much of it done by the Getty Institute. Here are a few shots of the fabulous Sacellum Augustus, a shrine to Caesar Augustus that maintains not only these beautiful frescoes, but also the charred remnants of the wooden beams that once supported the upper floors.

Detail of a spiraling column with a Corinthian capital 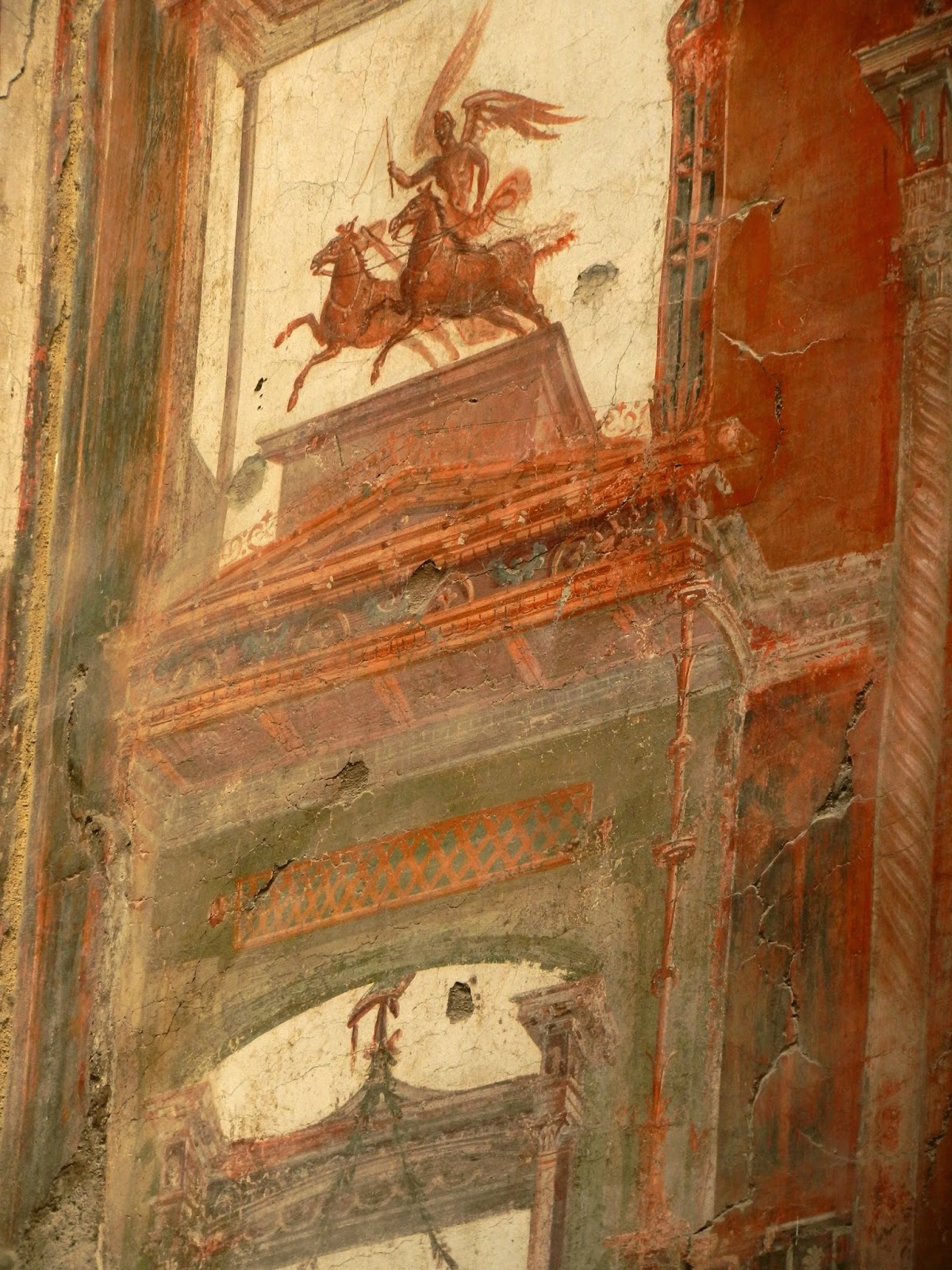 Posted by Steve Shriver at 4:04 PM No comments:

After reading in many guidebooks that the modern town of Pompeii was to be avoided, we were pleasantly surprised by it's large park like piazza, active passeggiata, and beautiful 19th century Marian church. Say what you will about 19th century ornament; they had worked it out to a science, which in the right hands could be masterful.


Posted by Steve Shriver at 8:55 AM No comments:

Email ThisBlogThis!Share to TwitterShare to FacebookShare to Pinterest
Labels: pompeii

As I said a few posts ago, I'm not going to go deep on the painting styles of Pompeii just yet, but here's a little teaser for when I do. The Fourth Style is sometimes known as the Baroque or Intricate period of Roman painting. As it was the last period of art before Vesuvius buried Pompeii (in 79 AD), it is found in many places in the Bay of Naples. Although the styles continued to evolve in other parts of the Roman Empire, by far the largest bulk of our knowledge comes from this area that was so well preserved under the tons of ashes left by the volcano.
One of the easy ways to recognize work that was done in this late style is what are sometimes called "Embroidery" style borders: simple but precise one or two colored strips with repeating elements that are usually quite abstract. Here's a few examples from my trip last summer.

Posted by Steve Shriver at 9:40 AM No comments:

Detail of a decorative column used as a panel division in the Villa Arianna at Stabia. Very delicate and refined work. 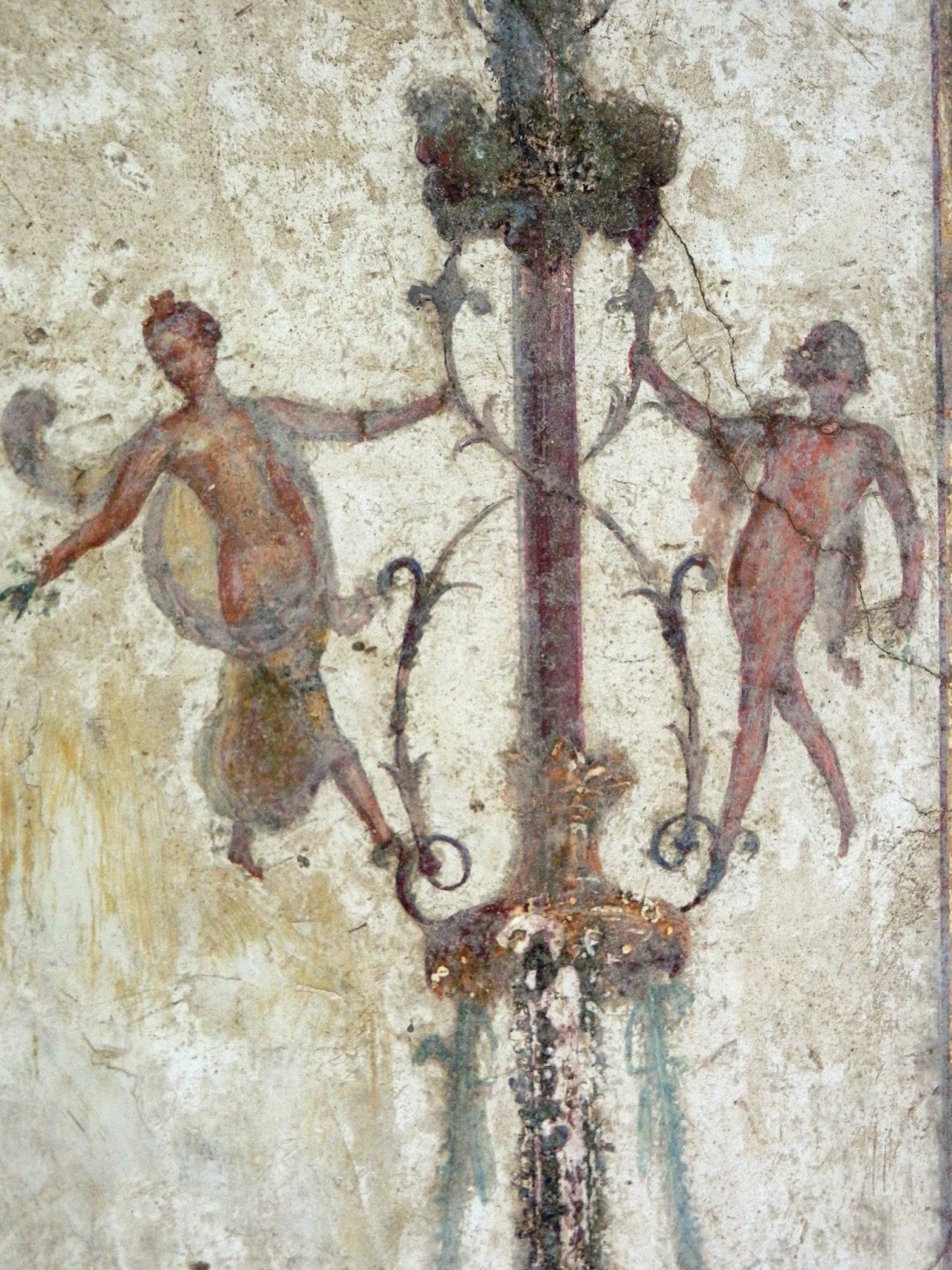 Posted by Steve Shriver at 10:10 AM No comments: