Today we started out with a bang- we got to meet up with Carolina d'Ayala Valva, who will be coming to my studio in October to teach a class in grottesca using egg tempera. Really great to finally meet her in person- we've been Facebook friends for some time now. She took us to a wonderful old bakery nearby where we sampled some killer pastries, then she showed us a sample of what she will be doing for the class. Very exciting! If anyone reading this is considering coming to it (or even if you're just learning about it now,) I guarantee this will be an amazing class. The sample is gorgeous, and it will be a technique very few people have used.

Carolina also shared with us that she has been contacted by the owners of Zuber wallpapers to create a 12 meter long panoramic paper for them. This is a gigantic honor in case you don't know! Zuber is one of the oldest French paper printers, and their panoramic papers are in the finest homes in the world, including the White House. They have given her carte blanche to create this new paper. I am quite jealous!!

Carolina also directed us to the Palazzo Colonna, an old house very near the center of town that has a very good painting collection, including a great Carracci of a guy eating a bowl of beans, which was a very uncommon thing to paint in the 16th century. My camera ran out of battery near the end of our tour, so we hiked back up the hill to the hovel to eat some lunch, then we kind of had quiet time as is the practice around these parts. Another late afternoon thunder shower brought some welcome relief from the heat, which has been building the last few days.

After the weather cleared up we headed back down to the Pantheon and S Maria sopra Minerva, both about to close, then wandered until we found Dolci Nonna Vicenza, where they make amazing canolli, which we partook of, slowly meandering back up the hill as the dusk fell and the shadows lengthened.

We will be leaving the Casa del Formaggio tomorrow without regrets, heading down to Pompeii, Oplontis, and Herculaneum. I'm psyched, although there's still so much we'd like to see in Roma. We met a nice young couple today at the pastry shop, and they said they'd been here two months and were just beginning to feel like they'd seen all the sights, though they hadn't yet heard of the Villa Torlonia! So my guess is you could be here quite some time before it got routine. In my case, probably forever!

Posted by Steve Shriver at 9:14 AM No comments:

Started the day with a fabulous visit to the lovely local laundromat, where we paid the ridiculous sum of around $30 for the privilege of washing our own clothes in their machines! Really! The only upside was that they had an issue of Q magazine from earlier this spring that had a bunch of good articles on David Bowie. So at least I was entertained.

After that much excitement, it was hard to get motivated for anything else, but we finally settled on going to see the Vatican Museums, since it was on our subway line. Just kidding- one of my favorite museums in the world, mostly because they dispense with all that boring stuff hung on the walls and just cut to the stuff painted right on the walls (and the ceilings, and the furniture, and the clothing). Of course, they do make you walk through about 10 galleries of "modern" art on the way to the Sistine, but that must be some of the loneliest art in the world- nobody stops to actually look at it. (there is a lovely little Odilon Redon drawing in one of the rooms, sadly neglected. I'll take it if no one else wants it!)

Anyways, we went down there around two pm and walked right in with no line. We had been told about a night time session on Friday nights that's supposed to be less crowded, but I'm glad we went during the day, since their artificial lighting is not so good, and I'm all about the photos, as you might have guessed. It was a bit crowded, especially in the first few halls, and especially since they are doing work in a couple of the big hallways which compresses the space further.

They have also added a ton of merchandising since I was here last time 6 years ago. Book counters were everywhere, adding to the congestion. I can just see some marketing fiend saying "You are missing a big income source here fellows! You gotta sell it to them before they get outside the place!" YUCK! Resin castings of classical sculptures are really awful, will be impossible to get home, and will be totally ignored once there. Most people are just trying to get into the Sistine while they are in there, and totally glide past the amazing creativity of halls like the Cartografiche and Raphael's Stanze.

But not me! I'm like that stick poking up in the river- all the flowing flotsam has to get around me one way or another as I steady my camera on the door frame or bannister of the staircase to take a detail shot of the amazing ornament on the walls and ceilings. Tough. The Hall of Maps (Cartografiche) was half draped with a scaffold, but it is still incredible- all 400 feet of it! About an hour into our visit we decided to get a snack downstairs, so we traversed that hall 3 times, including once against the flow (ever feel like a salmon?) The amount of traffic through there is phenomenal- I can well imagine them curtailing it for preservation reasons before too long- get it while it's good!

The Raphael rooms are impressive- some day I'll figure out how to visit the loggia, but til then these will have to suffice. His creativity in dealing with the same groin vaulted space in four different treatments is remarkable. There were also a couple rooms by Pinturricchio that were like a pleasant eddy that nobody went in. They had original tiled floors and a noticeably quieter feeling. These were the Borgia apartments, made for the not so nice Pope Alexander VI.

We did finally get to the Sistine Chapel, and it is worth all the press. I'm one of those who was all for the cleaning process, especially now that you can see the little patches that they left uncleaned. Michelangelo's way with color was as impressive as his way with form, in my opinion. The colors of the Libyan Sibyl just glow in a way that nobody else at that time was doing- at least not in fresco. He was also an obsessive experimenter with his colors. The green fabrics in the ceiling are never treated the same way twice. Here he uses a purple highlight; there it's pink, here the shadows are blue, there red. And the lower murals are also great, though they are merely decorations next to Michelangelo's work above. How I envy the job of the restoration people on that job! I would love to be face to face with one of those giant figures (for a little while- I guess I don't really envy them being there for months on end, cleaning a two foot patch with a sable brush and cotton swabs.


Damn! I'm really getting verbose! It's all your guys fault, saying you like reading it!

Made our way home via the Piazza del Popolo, then up to the edge of the Borghese gardens at sunset. We have caught so many amazing natural lights on this trip. Also high point vantages around Rome! Fun getting a more solid feeling for the layout of the town. Went down the Spanish Steps and wondered why every city in the US doesn't have a space like that- a place that's just fun to hang around in when you don't know where you want to go. Also a great place to meet people: ones you know and ones you don't.

Finally went by the Trevi Fountain, which was overflowing with tourists and eager photo sellers. Not my cup of tea, but we did throw in a coin to make sure we can come back again. Made it back to the Casa della Stinche for our repast and catching up with internet. Need to turn in now so that we can meet our friend Carolina tomorrow morning for coffee.
Posted by Steve Shriver at 11:30 AM No comments:

Palazzo Vecchio photos up on Flickr.com

Just uploaded 126 new photos of (mostly) the interior ornamental painting at the Palazzo Vecchio in Florence, taken in June 2013. Enjoy it here 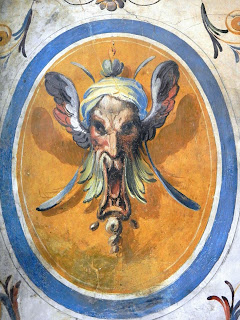