Acanthus #5- Roll me over and do it again!

All right! If you've been doing the homework, you have now drawn out a flat acanthus leaf with all of the necessary components of its design. Way to go! However, acanthus ornament is very rarely depicted as flat. ("You mean I did all this work and I'm not even going to use it?!") You will use it, but we will now modify the leaf shape to fit different purposes.

Probably the first thing most people will associate with the acanthus is the decorative foliage of a Corinthian style capital, as seen in this beautiful Beaux-Arts print from Camillo Boito's book, Gli Stili dell'Ornamento (1882). As you can see, the leaves of the capital lean out and bend over, which is the norm for a Corinthian capital. Look also at the stylization of the eyelets on this leaf; they look almost like the metal-ringed eyelets on a workboot. This is again a stylization: it would not occur in nature, but it looks clean, and it attracts the eye by creating a highlight around the dark of the eye, making a clear punctuation of the leaf's rhythm.


Below is an acanthus leaf applied to the bottom side of a modillion, or soffit bracket, from the Temple of Castor and Pollux in the Roman Forum. Again the top is bent forward. Also look at the eyelets on this one; cut very squarely with tiny leaflets hanging down, and the deep grooving of the leaflets, a characteristic that is seen in many examples from Greece and Asia Minor.

So here's a quick run down on how to do this bending, taken from James Page's Guide for Drawing the Acanthus, (1840). I won't go into too much detail, as I think the drawings are pretty self-explanatory.

All of the examples of capitals that I have shown here are in the more "olivine" style (leaves that look like an olive tree's), another variant on the acanthus leaf which can be found in many places. Look at it carefully, and draw a section, so that you can recognize it and be ready to design with it, noting the cleaner, more linear, more geometric style by comparison to the frillier, more organic style that we have been using for the lessons. Each has its purpose, in accordance with the architecture it enhances.

Next up: Twisting the Night Away!

Posted by Steve Shriver at 4:13 PM No comments:

Email ThisBlogThis!Share to TwitterShare to FacebookShare to Pinterest
Labels: acanthus, Corinthian, leaves, Temple of Castor and Pollux, Temple of Mars Ultor, Temple of the Winds

Ok! Whew! Hopefully if you are reading this you have gotten as far as drawing the basic structure and outline of the acanthus leaf as I have outlined in the last three posts. Give yourself a pat on the back! This is NOT a simple form! In fact, it's quite a complex form, but it is very important to understand these basics before we move on to the next step, which is where the fun starts.

So far what we've been doing is the mechanics of the leaf- it's outline, structure, and form. Next up is filling in the details; the leaf tips, the eyelets, and the profile of the leaf, leading into the shading of the form to clarify its form. Even if you are planning to finalize this design in a three-dimensional output, it is very important that you understand all the aspects of that form via drawing before you start

The profile of the leaf we have been working on thus far is fairly simple, so that we may learn the shape without dealing with too many bends and twists. Seen in profile, the leaf, as rendered below (from Page's book), would be almost flat, with a slight curve under at the bottom. In a horizontal section it appears like a bird's wings, as in the top part of the illustration here. 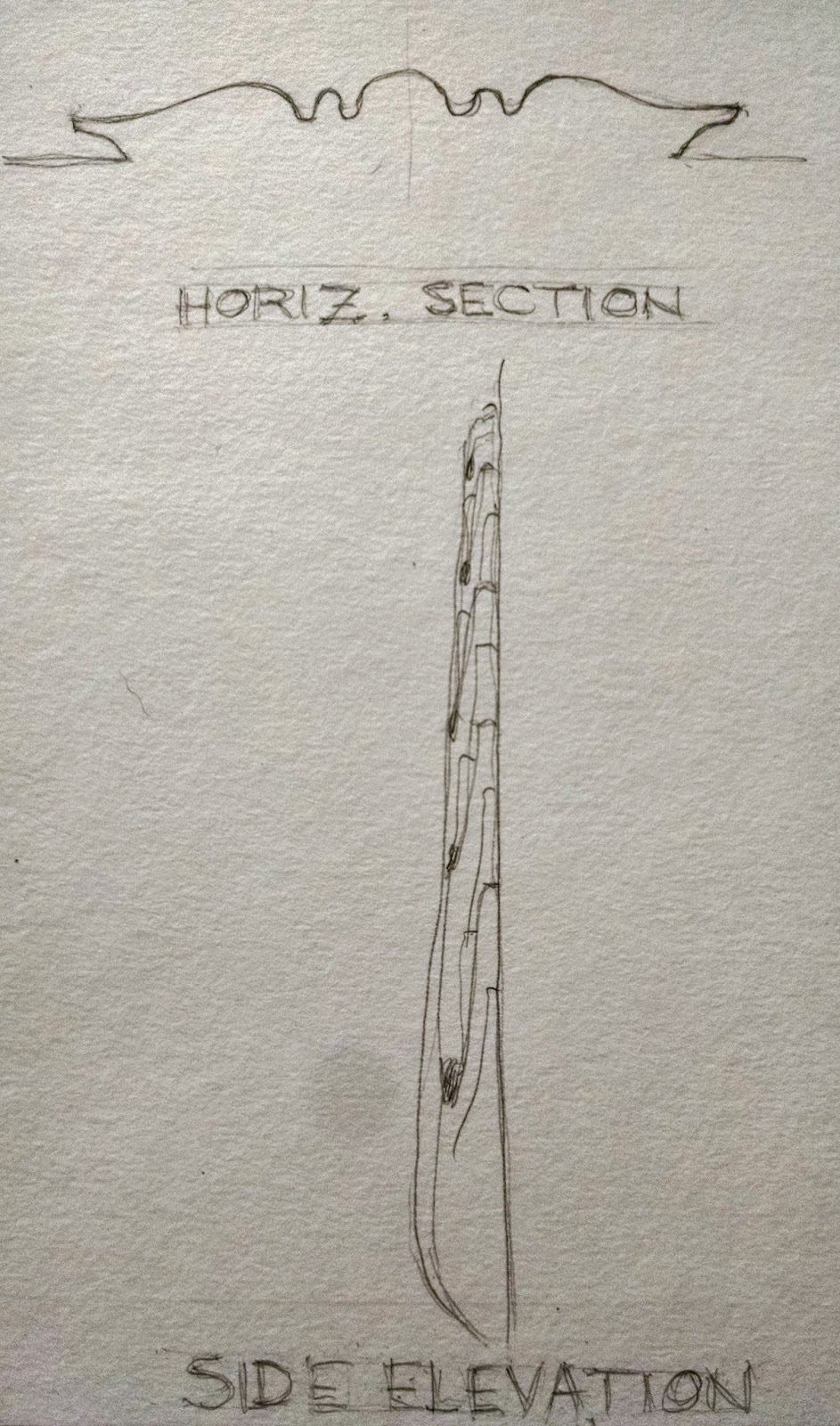 We had left off on the last post with an outlined leaf that had begun to be broken down into the smaller leaflet divisions. Here is a good example, again from Page, that shows the further division, which is based on the same method that was used for the larger divisions, though becoming more irregular and asymmetrical as it gets smaller and smaller. One important thing to notice is how the end of each leaflet flows into the main part of the leaf, which then flows down and into the stem channels to the base of the leaf. See how all those parallel lines converge as they descend the leaf? 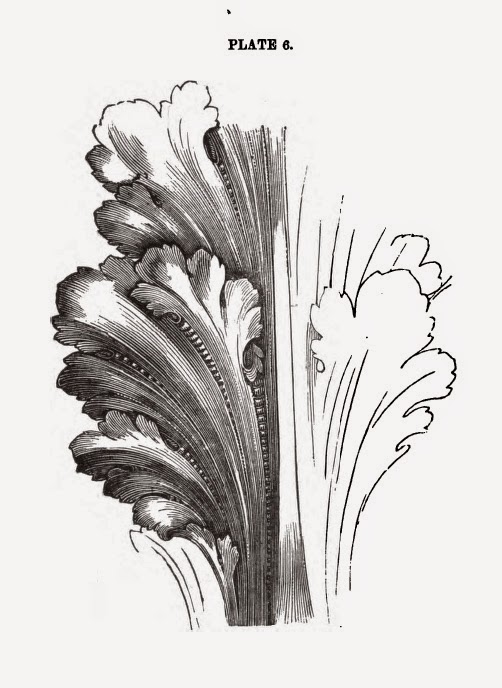 One last detail I will point out is in the eyelet and the ridge that it creates. In Page's example seen here, there is a stylized rhythmic notching of the ridge that can be found in many examples from historical models. There is also a "skirt" of leaves around the large eyelet on the left side of the leaf, again something that is seen quite often in ornamental work. The skirt protrudes from the rib, catching light and emphasizing the eyelet's darkness. I will show more examples of these stylizations later, but for now perhaps you can work on your drawing of the whole leaf (if you have actually started one!) and see if you can get it close to the example 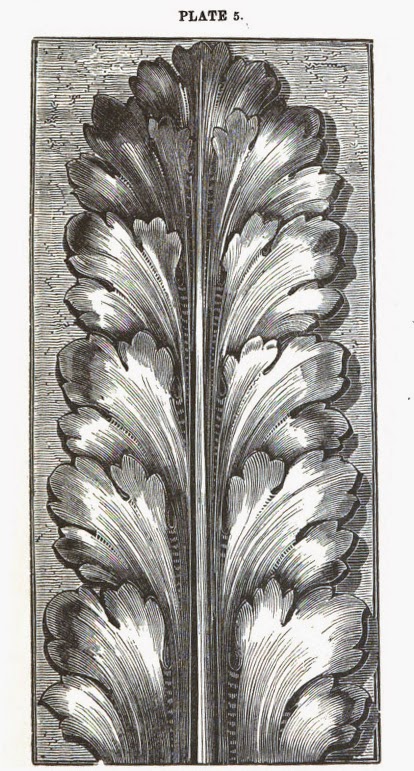 Next up: Variations on a theme

Posted by Steve Shriver at 3:19 PM No comments:

Now that we've got the basic structure of the leaf and the position of the eyelets, it's time to form the lobes of the leaf. As I mentioned in the last post, the convention is for the lower lobes to overlap the one above. Here's how we do that.

Step Eight: Aligned with each of the eyelets that you drew in the last step make a circle that touches the edge of the leaf, and that has a center about parallel with the eyelet. As usual, these are only guides that will disappear in a few steps, so draw these lightly!
As you can see, I only drew one side of the leaf. That's because from this step on I will be folding the paper in half to do the other side of it, to avoid having to erase quite as much. For now, just leave it as it is here- one half only drawn in with the circles.

Step Nine: What we will be drawing here are the central veins of the lobes, which in ornamental language are usually represented by a crease in the leaf. The tip of each crease starts at the point on the perimeter of the leaf that is halfway between each of the eyes, represented here by where the horizontal dotted lines cross the outside profile. They then curve and taper downwards, where they will all flow into the gully that defines the side of the central rib of the leaf. Notice that each of the creases passes through the center point of each of the circles and passes just above the eyelet of the next lobe down.

Step Ten: We now begin to define the individual lobes of the leaf, starting at the bottom and progressing upwards. Each lobe begins at the eyelet (as we practiced on the last lesson), curves upward around the circumference of the circle, and comes to a point at the end of the crease. It then returns downwards around the outside of the circle to die under the top edge of the leaf below it.

Step Eleven: Here I have erased the circles used as guides so that you can see more clearly the shape of the lobes

Step Eleven: By folding the paper in half vertically and tracing the design, I have duplicated the lobes onto the other side of the leaf (without going through the whole process of circles and creases.) I also erased the last bit of the crease near the tip of the lobes, an aspect that will be further explored when we talk about styles and leaf types. You should still be drawing lightly, as even now we will be erasing much of this before we are done.

The other trick you can use in the sequence of these steps is to flip the paper and trace from the other side each time  you make a new step, that way you can completely erase the step before without erasing the current drawing. This is easiest with vellum, but you can also hold regular paper up to a window or a light box so that you can see through it.

Step Twelve: Subdividing the lobes gives the acanthus leaf its individual character, and also allows us to take guesses as to where and when an example might be found historically. There are many ways of doing this, but I've attempted here to distill what is common to most of them, so that we may use it in this lesson.

First up, a note on the particular style that I'm using in this example. The curve on the left side of this illustration is what might be called an ogival arch (especially if my Illustrator skills were better!) That  is, it has two "s" curves meeting at a point in the middle. To me this is a nod to the natural form of the acanthus, which has sharp spines at the tips of its leaves, so I will use it for our lesson.

Secondly, as seen in the illustration at right, the lobes are roughly symmetrical over the axis of the central crease, so when subdividing we will arrange 3 circles to fit inside the lobe, using the perpendicular axis to the crease as the base of the triangle formed by the 3 circles (Just look at the illustration- don't try to make sense of it verbally!) As usual, these are only guides, so draw lightly!! 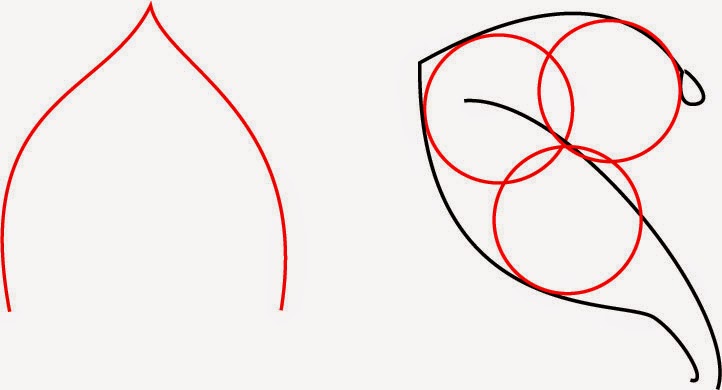 Here is the method seen above as applied to the lobes of the right side (we can do the same method of advancing one side and tracing it to the other side again.)

Step Thirteen: Following the same method we used for the general lobe shape, we create leaflets that follow the outlines of the three enclosed circles, noting that the notches formed between the leaflets should make a more or less perpendicular line to the central crease (see illustration two below this one) 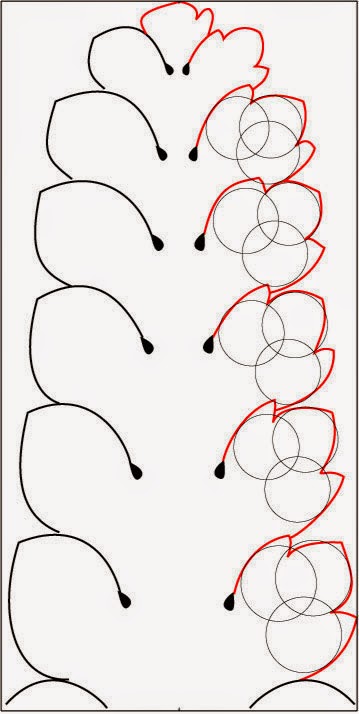 Step Fourteen: Removed the guide circles (and replaced the center creases that I accidentally took out of the last illustration!) 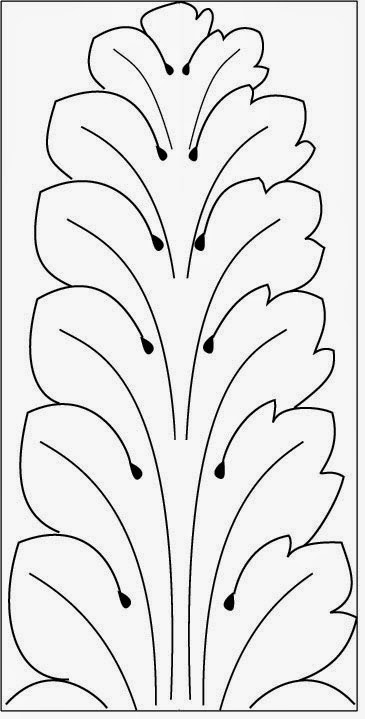 Step Fifteen: Illustrating  the small eyelets separating the leaflets and how they are perpendicular to the central crease of the lobe. Also notice how the central rib of the whole leaf has been added, and how the creases and folds of the eyelets all spring from the same channels on both sides.

The further subdivision of the lobes gets less orderly from this point on, with more asymmetry visible. Nevertheless, the tips of each leaflet and its divisions still follow an arrow-like form proceeding from the central rib and channels of the leaf. I will go deeper into style and variants on the form in the next post.