House of Heinsbergen, part one

About two years into doing my own thing I got a call from my friend Paul, who had a pre-cast molding company here in LA, about a guy who was looking for a painter to redo some murals at a house in Pacific Palisades that was originally owned by Anthony Heinsbergen. Even though I wasn't really interested in pursuing decorative work at the time, I told him I'd take a look, if for no other reason than curiosity.

Anthony Heinsbergen, for those who don't know, was the head of a large (up to 185 employees at its peak) decorating firm that was responsible for the vast majority of painted theaters and other public spaces around Los Angeles and the West Coast. During the history of the company, from the early 20's until the 1960's, they were responsible for over 700 projects, including the Pantages theaters, Warner theaters, the Los Angeles City Hall, and many others.


The new owners of the home Heinsbergen had built for his family on a beautiful bluff overlooking the Pacific had received an album of black and white photos of the house as it looked when it was built in 1930. They wanted to restore some of the ceilings that had been removed during a stint when Joseph Cotten and his wife owned the house and had "modernized" it with white shag carpets and white walls.
When I saw this photo I knew I was going to be involved in this project, though I had no idea just how big it would turn out to be. My old boss Doug Bouman had worked for Heinsbergen as a teenager, and his dad and uncle were Anthony's right hand men. When I saw some color slides of the house taken some years later, I noticed they were addressed to Frank Bouman. It has been an ongoing idea to create a book on Heinsbergen, who should really be an LA icon, but is largely unknown today. When you compare the output of his work to that of the great Renaissance painters it most definitely holds up, even if much of it was derivative (an apt characteristic for the chaotic growth of the city and the movie industry that supports much of its wealth)
As requested, I drew up maquettes for the ceiling shown above, and we were lucky to be able to show them to Anthony's son Tony, who had spent his younger years in the house, for color consultation. After a few small revisions I got started. Here's how the upper hall turned out: 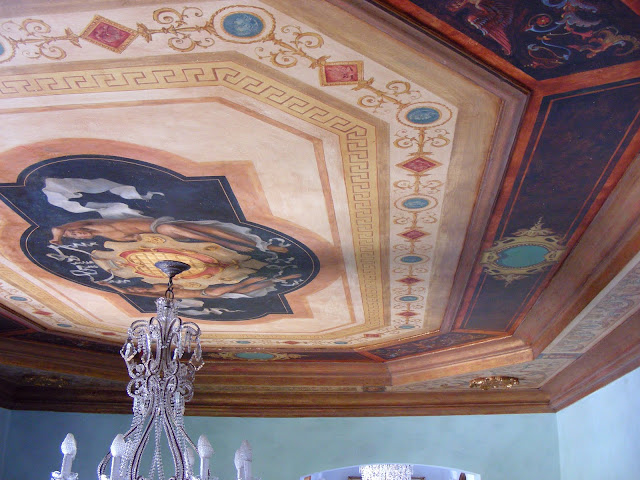 At the same time, I did the lower hallway ceilings, and a frieze band with birds painted over gold leaf, also in imitation of what was originally there. 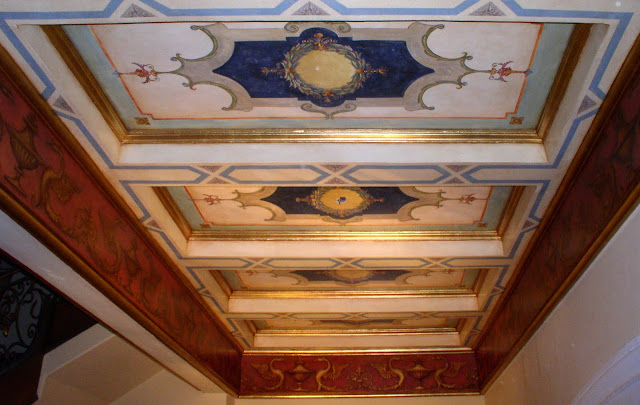 After this work was done we began looking at ideas for other rooms- the new owner is never short on ideas: he is an avid design reader and has been a very active participant in the design process at every level. The next room we turned our attention to was the two story room that had originally been Heinsbergen's studio, but had been turned into an indoor pool somewhere along the line. Eventually it is planned to become a movie theater. The first idea was to do it in a Greek style, inspired by the Villa Kerylos, in southern France. 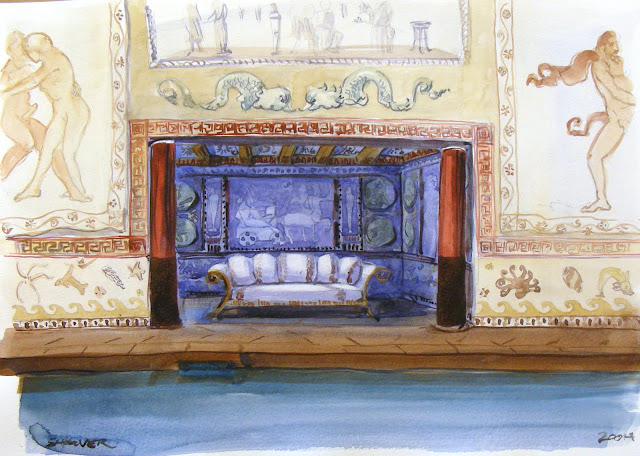 It soon changed to a Pompeian theme, which really got me started with the research aspect of the last few years. The owner and I booked a date to look at the Getty Museum's collection of antique books on Pompeii, which is vast and beautiful. It was a bit frustrating though, in that you can look, but not photograph, the images. There are wonderful 19th century books that have full scale drawings of designs from Pompeii that I would love to copy! In any case, before long I got started on a full scale maquette of the coffered ceiling, built out of cardboard and wood, so that the owner would truly have a WYSIWYG model to go by for the colors and designs. 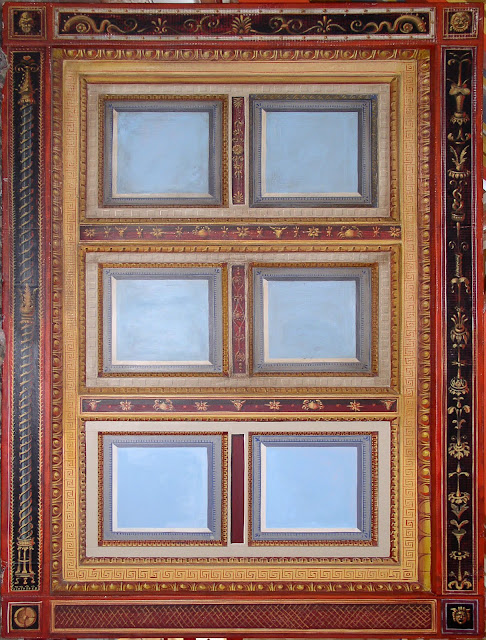 There are 27 panels like this on the whole ceiling, and this maquette has different ideas for different parts of it. I counted up one time and found that there are over 3,000 egg-and-darts altogether! I enlisted the help of some of the Guatemalan workers from the job to fill in the base colors- when we finished it looked like a Mc Donalds restaurant with bright red, yellow, and blue! 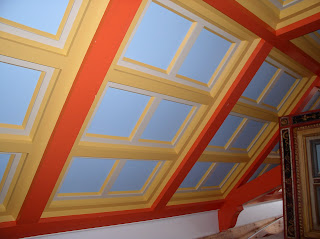 Yikes! Makes you wonder how some of those Roman era houses looked originally, before they got the lovely patina of dirt and abrasion to mellow them out. I trained some of these guys to also help me with the ornament, since so much of it is simply repetitive marks, though even that is a challenge for some.  There were so many steps in the process of completing each section- we had a scaffold that straddled the pool, but it only covered one third of the ceiling at a time and moving it was a process, so I tried to complete as much as was possible in each section before moving on. 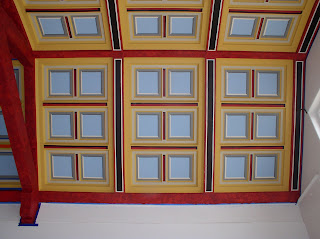 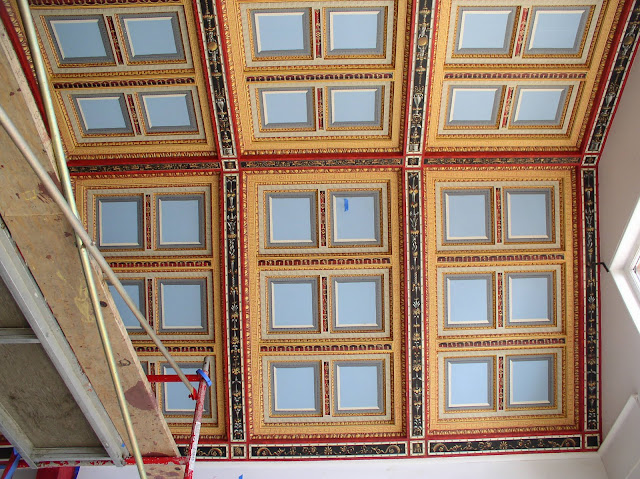 In all, it took over a year to complete this ceiling, as it has many detailed bits. Then it was all antiqued and abraded to soften the look. Here's how it turned out: 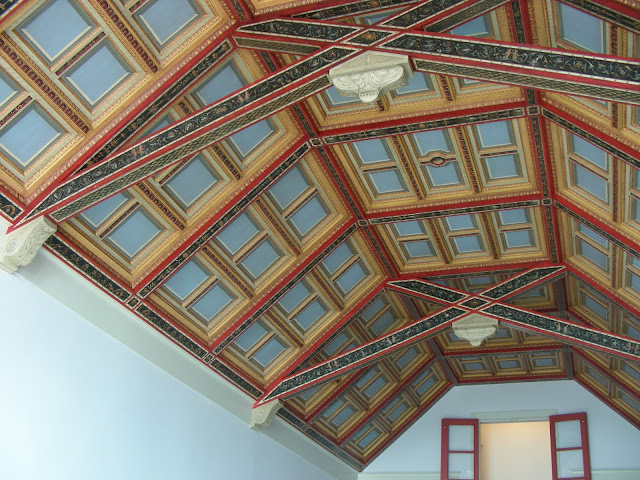 and here's a detail, prior to antiquing. 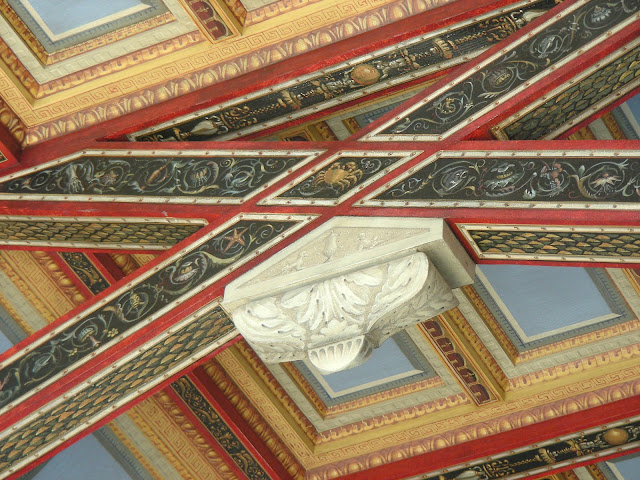 The ceiling is actually just a prelude to the walls, which haven't happened yet as they are waiting for the construction to catch up. I certainly hope it happens one of these days.
For more photos you can go to my Flickr set on the house, which we also call the Villa Tramonto.
Posted by Steve Shriver at 11:39 AM

Email ThisBlogThis!Share to TwitterShare to FacebookShare to Pinterest
Labels: about me, ceilings, Heinsbergen, Pompeian style