The small town of Mantova (Mantua) has long been on my list of things to see in Italy, mostly for the Palazzo del Te, Giulio Romano's masterwork. I was very excited to be able to include it in our itinerary. Mantova is a unique town surrounded by 3 lakes that are actually dammed parts of its river. Now it is a peninsula in the river; previously it was an island, with the lakes forming a good sized moat to keep it safe from invaders, a necessity in the dead flat plain where it lies.

We started our day at the main train station in Milan, a beautiful barrel vaulted Art Deco space clad in white marble with large tile murals. Our first encounter with the automated ticket machines was positive- they show you all the trains that are available, what they cost, and then take either your credit card or your cash and dispense your ticket. Easy as pie! On the train we discovered the one other thing you need to know, which is to get your ticket validated at one of the little timestamp machines in the station, or they charge you 5 Euros! Won't make that mistake again!

We arrived in Mantova before lunch time and I realized I hadn't saved the screen that showed where our hotel was exactly. I remembered it was pretty near the train station, so we decided to walk across the street and ask at the first hotel we saw. Despite having a completely different name on the sign, turned out this was our place! Convenient! Plopped our stuff into the room, noting the good AC it had, then walked out to find some food and go to the Palazzo Ducale, another site I knew about. On the way to the Palazzo we found a good sized supermarket and picked up picnic supplies- arugula, tomatoes, some fresh mozzarella for me, some beans for Marianne, some marinated veggies, delicious apricots and some dark chocolate! Then we headed out to find the Palazzo. In my defense, Italian towns and cities have no semblance of grid pattern to them, and the maps they hand out most places conveniently skip over a lot of the smaller streets and alleys, so of course we were off track and lost within about 20 (hot and getting hotter) minutes. We paused by the river dike to get our bearings and realized we'd have to backtrack to get around the little inlet that blocked the way, decided the park there was a bit seedy, then hoofed it another 20 minutes until we found the Palazzo, and a delightful little park next to it for our repast.

The park was shady and had a nice fountain in the center, with topiaries and benches set all around. The linden (or lime) trees were in full bloom, giving off a heavenly scent somewhat like jasmine, as we munched our lunch contentedly. After we packed up our leftovers, we entered the immense palazzo and found ourselves in a series of large shady rooms with windows wide open to the park, so that the fragrance permeated the space, lending a feeling of timelessness to the halls. 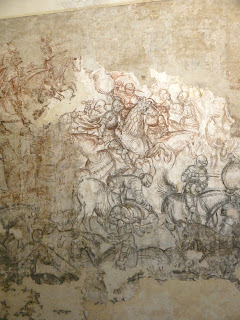 The Palazzo Ducale could be a museum of decorative wall painting, with frescoes that range from late medieval up to the 19th century. Some of the earliest displays were removed from other spaces, churches mostly, and placed on the walls here for protection. It always astounds me that it's even possible to remove a fresco mural, seeing as how they are essentially a very friable layer of plaster with delicate pigments adhered to the surface. Yet somehow they do it without losing too much, and they were placed in these spaces close to their original configurations. There was a fascinating room that displays the sinopia made by Pisanello for a battle mural that was never finished. A sinopia is an underlying drawing for a fresco, usually done in an earth red paint or chalk, though in this case he also used black.

Further on are rooms that display high Renaissance murals, including Mantegna's famous "Camera degli Sposi" with its trompe l'oeil oculus and peering figures looking down from the ceiling. Unfortunately this room was closed because of earthquake damage from the year before, but it was hardly missed considering the wealth of other rooms to look at. The photo police were in effect here, so that I had to be cautious about where and when to click, but I did manage to snap quite a few anyways. There are courtyards and gardens, staircases and grottoes, all looking to be in relatively good shape with water and air quality issues seemingly under control. There was a beautiful set of very early rooms down deep in the castle where you could imagine the mistress retiring to stay cool during the hot summer months. There are murals by Rubens, Romano, and many others, and a whole wing of neo-classical rooms that contain a set of tapestries too. There was also a large dining room in a Rococo style with figures of the six nearby rivers and grottoes at both ends of the room. I could easily go back for another round in this museum, and hopefully I can get permission some day to photograph it unmolested.

Across the piazza from the palazzo is the Basilica di Sant'Andrea, which also was damaged by the earthquake but is in full swing to repair and restore its interior, with a gigantic scaffold I would have paid plenty to climb (they even had an elevator on it!) We went in just as they were closing though, so we left quickly with a vow to return the next day. We continued our tour of the parks with another one not far away where we watched the river for a while (though there was a busy street between us and the water), then we had a second picnic on a quiet bench behind a graffiti scrawled monument. Graffiti is immensely popular in Italy now, as it has been since Pompeiian times. It ranges from stupid tagging of ancient marbles to some colorful and witty pieces around the train stations. I'm not categorically against it, but the taggers should have more respect for the artists that came before. We walked back slowly as the swallows came out and circled the steeples. It seems like we always find the crappiest streets on our first forays, then gradually find the better routes until we can stay shady and romantic the whole way back.

Our hotel was called the "Antica Dimora" and it was directly across the street from the train station, which was very convenient. We had a plain, clean little room on a lightfilled courtyard, with spotty Wi-Fi, good AC, good shower, and a double bed. It cost €65/nite for two with a nice breakfast. I'd return to it for the price, though there's more romantic places in town to be sure.
Posted by Steve Shriver at 1:19 PM